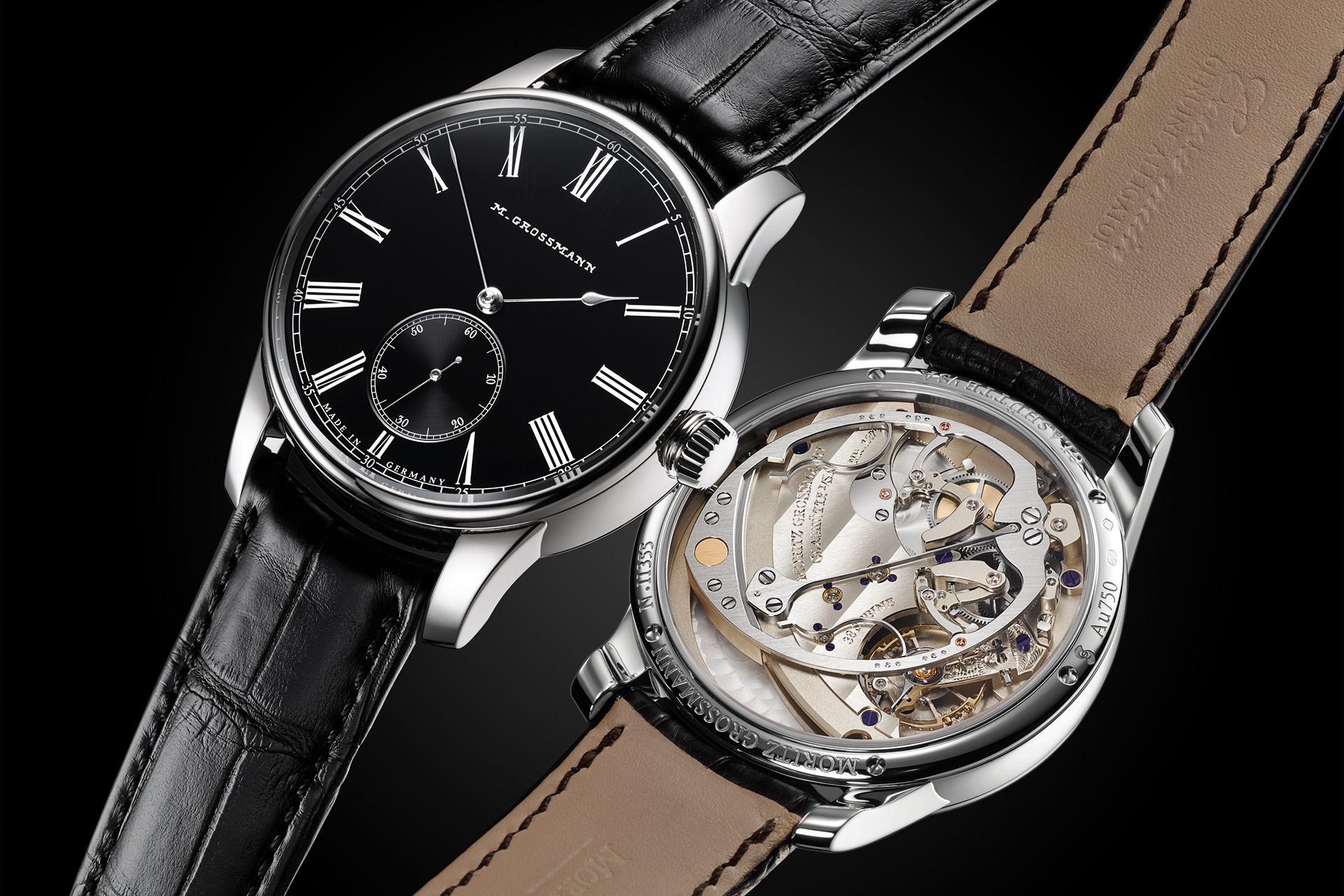 Traditional automatic hammer winding system with pendulum weight reveals a peek of the intricate mechanics and converts even the smallest movement into impressive winding power
• HAMATIC Vintage limited to 25 watches worldwide
• Highest standards of craftsmanship
o Mirror polished ‘black-or’ dial with shiny black surface
o Vintage ‘M. Grossmann’ logo from 1875
o The open hammer body in the centre brings the perfection of Grossmann’s watchmaking craftsmanship and the highest level of finish to life
o The finest, handcrafted hands measure 0.1 mm in width at the narrowest points
• Special features
o Specially designed movement based on the traditional hammer mechanism from the 19th century renders the HAMATIC unique in terms of its mechanics and beauty
o Even the slightest arm movement provides winding power
o Hammer winding mechanism with reduction gear works in both directions

What is it that connects people with time? Both are perpetually in motion. As the famous proverb says, ‘a rolling stone gathers no moss’, which reminds us of the benefits of an active lifestyle. This takes energy. Mechanical watches have been wound by hand for centuries – by turning a crown, a crank, a key or by hoisting weights on a chain. How can we fulfil the dream of a mechanism that makes consciously winding the watch superfluous? The answer is given by man himself. The movement of the watch wearer supplies the self-winding watch with the energy it needs.

Grossmann’s aesthetics – interpreting the traditional automatic hammer makes the most beautiful mechanics come alive
The HAMATIC Vintage draws its kinetic energy from the arm movement of the watch wearer. The movement of the arm continuously deflects a pendulum in the shape of a hammer with a heavy gold hammer head. This kinetic energy is transferred via the ratchet wheel to the mainspring in the barrel and winds the watch.
Inspired by the vintage idea, the Moritz Grossmann designers adopted the traditional concept of an automatic hammer winding system from the 19th century and refined it according to the principles of Grossmann’s supreme craftsmanship, resulting in a new movement.
The elaborate design of the hammer mechanism, known as the HAMATIC for short, provides a stage for the strikingly crafted gold hammer head and reveals the fascinating mechanics and exceptional finish of Grossmann’s 106.0 movement. The oval hammer body is open in the middle, offering a clear view of the beauty of the highly sophisticated mechanism.