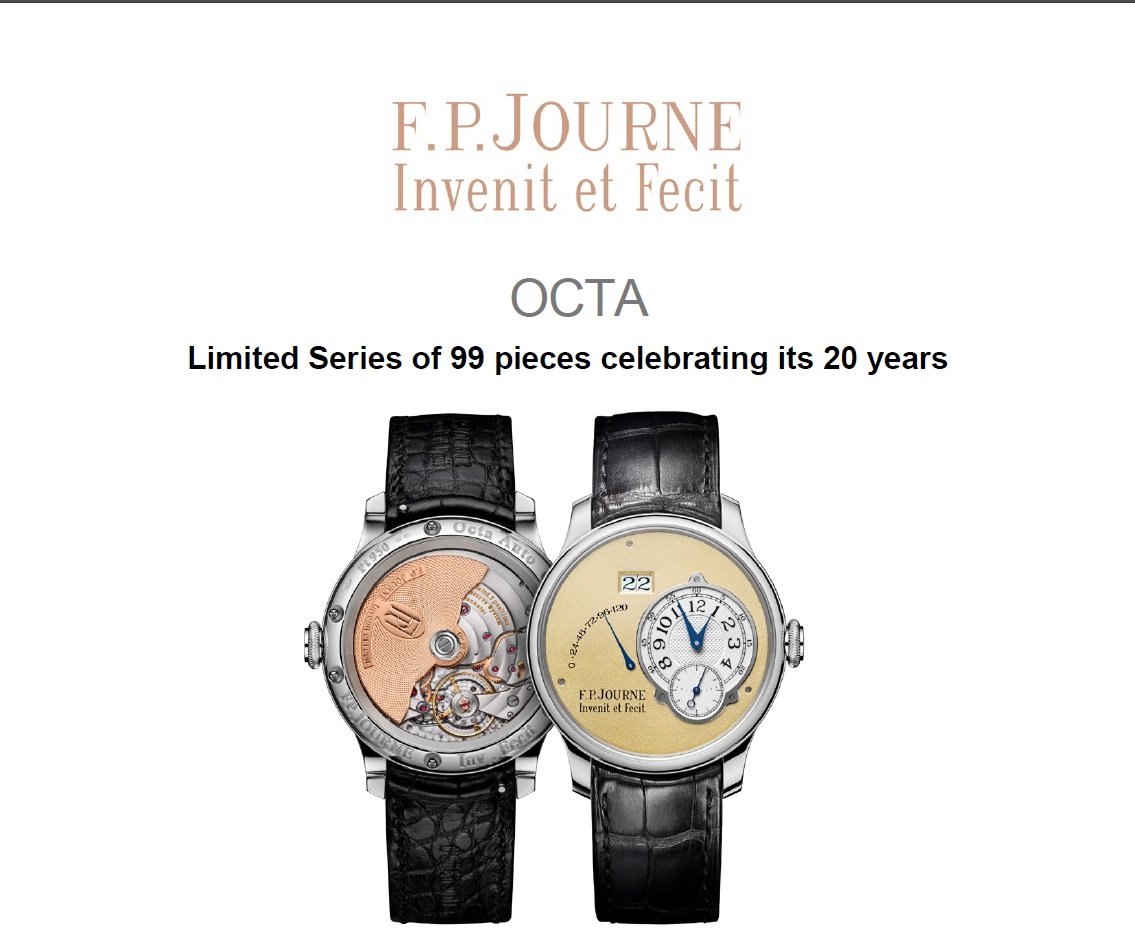 The presentation of the Octa automatic movement in 2001 has marked a turning point and proved that the watchmaking revolution of the 21st century was underway. Efficient in all respects, it has undergone only three evolutions during its 20 years of operation. The most recent one concerns the winding automation system. It has moved from bi-directional to unidirectional winding, which is more efficient to guarantee the rapid tensioning of the long spring of the barrel.
For François-Paul Journe, since the launch and minimal modifications, the Octa has proven its precision and endurance and as he states: “The Octa is an accomplished movement that requires no further modification due to its almost unreal performance”.
To celebrate its 20th anniversary, F.P.Journe presents the Automatique in a limited series of 99 pieces, with, for those nostalgic of the early years, a case in Platinum of 40 mm powered with the calibre 1300.3 in rhodium-plated Brass, and a satin-finished dial in yellow Gold, similar to those produced in 2001 when François-Paul finished them by hand.
The power reserve indicator has been moved down slightly to leave more space for the enlarged date, displayed in a window now measuring 4.7 x 2.6 mm for easier legibility. The numerals of the hour and minute dial have also been enlarged. Only one slight aesthetical modification has been made to the movement, now decorated with openwork bridges; this will be a feature as of 2021 on all 1300.3 calibres.
This Limited Series will be available at the 10 F.P.Journe Boutiques and Espaces. The Automatique will later join the current collection with a 40 or 42 mm case in Platinum or 18K 6N Gold, and a dial in Gold and guilloché Silver.
François-Paul Journe has first given life to unique, then to small quantities of rare timepieces, and subsequently imagined and launched in 2001, a collection of watches in which the perfection of the automatic caliber called Octa, became an obvious attribute in a world where everything is in perpetual motion. He has thus perfectly materialized this obsession that embodies the lifelong obsession of mechanical geniuses to produce a perpetual movement.
Undoubtedly, the Octa collection is the signature of the perfection of a style imbued with the vision of the Masters of Enlightenment, of which François-Paul is the heir of the intellectual approach of the profession and its relation to the object. It is a central element of a watchmaking line with a strong sense of meaning for a Manufacture attached to sound values of authenticity, rarity and precision, in the respect of horological traditions, to become a lasting part of the future.